Welcome to the Bleach Legends Wiki
The wiki, of fan invention, that anyone can edit!
Simply click the arrows immediately to the right of this message to navigate through this directory.
About Us

The Bleach Legends Wiki, which was founded in February 2014 by User:Wolfthorn, is a wiki of fan-invention based on the series Bleach. On this site, users are allowed to create their own characters, powers, Zanpaktuō, etc. and jump into the Bleach universe, as well as allowing them to collaborate together in what is known as a roleplay. In roleplays, users test their mettle against one another, allowing them to write stories together, pit characters against one another in fights, or even do comedy skits. Users are also encouraged to get to know each other, make friends, and communicate with each other via the Message Walls and Chat room, which are both provided by Wikia, to promote a friendly writing environment, as well as allowing them to collect feedback for their works. Our goal is to make the Bleach Legends Wiki the best Bleach fan fiction collaboration on the internet! 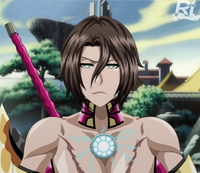 Matsunami Shinoda (媽祖波志野中, True Warrior of Pine Waves) is the main protagonist of Matsunami Gaiden and a primary supporting character in the sequel series: Legend of X. Formerly a Lieutenant of the Ninth Division, Matsunami was betrayed by Central 46 and left to die in Hueco Mundo. Due to a hero's intervention, Matsunami was 'reborn' in Hueco Mundo as a Visored, possessing Resurrección. During her lifetime, She has fought nurmerous battles teetering on the brink of death, she has lost her Shinigami powers, acquired Fullbring, regained and rebooted her shinigami powers and fought to protect the world in the 3rd Great Spiritual World War. Her contributions in the final days of the war earned her the title Hero of Soul Society (尸魂界の英雄, Seireitei no Eiyū), a title bestowed upon a hand full of individuals that greatly affected the outcome of the war. Additionally, her prowess on the battlefield earned her the monicker The Blind Archangel (大天使盲目的, Dai Tenshi Mōmokuteki). Out of all of Matsunami's accomplishments, her greatest was changing the destiny of the Shinoda Clan by stopping Kaiser from setting in motion a plan that could have resulted in Soul Society's defeat in the Thousand Year Blood-War.

Battle in the Spotlight: TBA

Feeling confident? Post a character roleplay challenge on the Forum!

Want to affiliate with us? Leave a request here

Retrieved from "https://bleachlegends.fandom.com/wiki/Bleach_Legends_Wiki?oldid=4385"
Community content is available under CC-BY-SA unless otherwise noted.